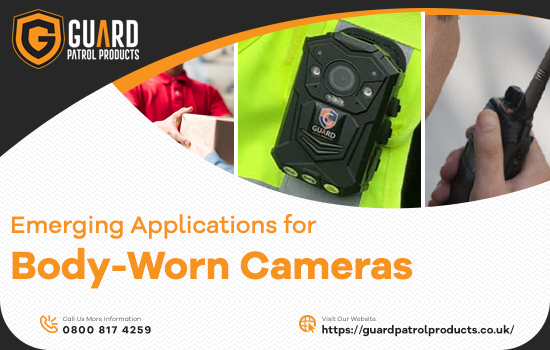 Comments Off on Emerging Applications for Body-Worn Cameras
article by: Mohan Sharma at: 22nd Mar 2022 under: News

The ability to record audio and video as evidence that one can review later is a blessing in disguise to many industries. Body-worn cameras (BWCs) do this well.

Mixed reactions from the public and users initially sowed a few doubts. While some saw the plethora of benefits it offered, others looked at it as an invasion of privacy. However, practical use during the past few years has underlined the fact that the positives outweigh the benefits.

There are many BWCs in the market, each having a distinct set of specifications and uses. One of the most reliable & versatile among them is the EH-15 body-worn camera.

The EH-15 body-worn camera has the perfect specifications and features to make it highly useful in multiple applications. Its camera clicks clear 21MP photos as single or multiple shots. It also records videos ranging from 480p to full 1080p (Full HD). All this is stored in its built-in 64GB memory.

Initially used only by the police, its successful stints have paved the way for more applications. Before we dive into it, let’s go over a few of its key features.

Police have a straightforward use for body-worn cameras.

The BWC on the officer helps them capture images of a crime scene to review later to rummage for clues that they might have missed in the first check. Officers can use the audio recording while interrogating a suspect or even pedestrians to ensure minimal loss of information. Wherever stronger evidence is desired, the officer can switch on the video recording to document every action with its wide-angle lens.

Security guards keep an area safe. They do so by guarding a spot or patrolling throughout the area to look out for anything out of ordinary.

With a body-worn camera, they can start recording as soon as they suspect any suspicious activity to give them an edge in terms of proof. One can transfer all the recorded images and videos to a computer through a built-in HDMI for review.

Patrol cars are an extension used by officials to reach the destination quicker and help patrol a large area.

Officers can use these cameras as dashboard cams to record evidence in case of a chase or when an incident is happening in front of the car. The wide lens records a 140-degree video, capturing details that other cameras won’t.

Academies that train police and other officials often use past cases for cadets to study.

The audio, video and image files can be easily transferred from the BWC to any computer/ laptop. This data can then be used to train cadets by showing them many scenarios they could experience on the job and preparing them in advance for it.

Apart from this, it is seen that people tend to behave less aggressively when they know they are being recorded. They become more aware of their actions, increasing the likeliness of reaching a non-violent solution.

Our body-worn cameras have an additional chest and shoulder harness that uses a Klick Fast Dock and straps to fix the camera at the desired place.

Want to know more? Contact us to know its features & applications in more detail.